History of the Blue Mouse On Tuesday evening, November 13, 1923, John Hamrick’s Blue Mouse Theatre had its Grand Opening on Proctor Street. It was named after a lounge in Paris, France, which showed the latest rage, ‘flicks’.

“A spectacular melodrama” called The Green Goddess was the first ‘picture show’ projected on the theatre’s ‘silent screen’. The headline in the Tacoma News Tribune called it the “Finest Suburban Theater in the Northwest”. The account in the newspaper the next day stated that “every one of the 420 seats was occupied and a good sized overflow greeted the management”.

The community theater prospered and in 1932 it was purchased by Will Conner and renamed the Proctor Theater. Forty years later, in 1972, he sold it and it was eventually renamed the Bijou in 1980.

Threatened by a proliferation of huge theater chain multiplexes, hard times fell upon neighborhood movie theaters in the late 80s and 90s. In 1993 a small group of activists and preservationists, fearing that a plan to “re-adapt” the theater into office space might become the buildings fate, joined together to purchase and restore the property. To this day they call themselves the Blue Mouse Associates. Under layers of paint, wood veneer and glass tiles put on in the ‘30s and ‘40s they discovered the original Craftsman-style timbering, stucco, brick pillars, globe light sconces, polished marble terrazzo and original mahogany doors. The same was the case with interior renovation. The theater’s original architectural charm was rediscovered in craftsmen staircases, chandelier surround, an ornate trellis around the proscenium arch, decorated capitals atop side wall columns and Tiffany-style glass exit signs. At eighty five, and one of the very oldest continuously operating movie theaters in the country, The Blue Mouse continues on with sights on her hundredth birthday. 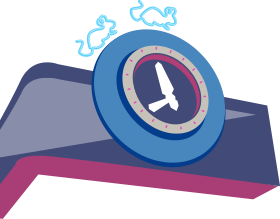